Sociologists use the termsocial interaction to refer to the ways in which people act toward one another when they meet.Social structure refers to the way in which a society is organized into predictable relationships. These concepts are central to sociological study because they focus on how different aspects of human behavior are related to one another.

The distinctive characteristic of social interaction among people is that human beings interpret or «define» each other's actions. In other words, our response to someone's behavior is based on the meaning we attach to his or her actions. Reality is shaped by our perceptions, evaluations and definitions. The ability to define social reality plays a very important role in our socialization within a society because the definition of the situation molds the thinking and the personality of the individual.

But social reality is not fixed, it changes and people very often take a different view of everyday behavior. Thus people can reconstruct or redefine social reality and reshape it by negotiating changes in patterns of social interaction. Theterm negotiation refers to the attempt to reach agreement with others concerning some objective.

Negotiation occurs on many levels. Me may negotiate with others regarding time (When should we arrive?) or space (Can we have a meeting at your house?) or even maintaining places in a shopping line. In modern industrial societies negotiation can take much more elaborate forms. For example, the tax structure of a country can hardly be viewed as fixed; rather it reflects the sum of negotiations for change at any time. It is rather important to understand that negotiations are not merely an aspect of social interaction; they underline much of our social behavior because most elements of social structure are not static and are, therefore, subject to change through bargaining, compromising, exchanging.

We can add negotiation to our list of cultural universals (see Unit III) because all societies provide guidelines or norms in which negotiations take place.

Statuses. When we speak of a person's «status» in casual conversation, the term usually conveys the meaning of influence, wealth, and fame. However, sociologists usestatus to refer to any of the full range of socially defined positions within a large group or society — from the lowest to the highest position. Within a society, a person can occupy the status of president of a state, fruit picker, son or daughter, violinist, teenager, resident of a city, dental technician or neighbor. Clearly, a person holds more than one status simultaneously. For example, one can be an economist, an author, a sister, a resident of London, an Englishwoman at the same time.

Unlike ascribed statuses,an achieved status is attained by a person largely through his or her own effort. Both bank president and burglar are achieved statuses, as are lawyer, pianist, advertising executive, and social worker. One must do something to acquire an achieved status — go to school, learn a skill, establish a friendship, or invent anew product.

Each person holds many different statuses, but certain statuses are more important than others.A master status is a status that dominates others and determines a person's general position within society. For example, while Jacqueline Kennedy Onuses served as a trade book editor at a New York publishing company, her status as the widow of the late President John F. Kennedy far outweighed her status as an editor.

Race and gender are given such importance in our society that they often dominate one's life. Indeed, such ascribed statuses very often influence achieved statuses and can function as master statuses that have an important impact on one's potential to achieve a desired professional and social status.

Social roles. Throughout our lives we are acquiring what sociologists call social roles.A social role is a set of expectations for people who occupy a given social position or status. Thus, we expect that cab drivers will know how to get around a city, that secretaries will be reliable in handling phone messages, and that police officers will take action if they see a citizen being threatened. With each distinctive social status — whether ascribed or achieved — come particular role expectations. However, actual performance varies from individual to individual. One secretary may assume extensive administrative responsibilities, while another may focus on clerical duties.

Roles are a significant component of social structure, because they contribute to a society's stability by enabling members to anticipate the behavior of others and to pattern their own actions accordingly. We learn how to fulfill a social role by observing the behavior and interactions of others.

Groups. In sociology,a group is any number of people with similar norms, values, and expectations, who regularly and consciously interact. The members of a hospital's business office, of a college fraternity or sorority, or of a professional basket-ball team constitute a group.

Every society is composed of many groups in which daily social interaction takes place.We seekout groups to establish friendships, to accomplish certain goals, and to fulfill social roles that we have acquired. Groups play a vital part in a society's social structure; they are an intermediate link between the individual and the larger society and much of social interaction and behavior is influenced by the norms and sanctions established by groups.

Sociologists have identified five major tasks, or functional prerequisites that a society must accomplish if it is to survive. They are shown in the table below. 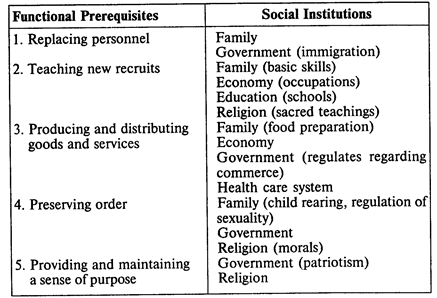 Other sociologists evaluate the social institutions from a conflict perspective and suggest that the present organization of social institutions is no accident and the outcome of this organization is not necessarily efficient and desirable. Moreover, they say that major institutions, such as education, help to maintain me privileges of the most powerful individuals and groups within a society, while contributing to the powerlessness of others. As one example, public schools in the United States are financed largely through property taxes. This allows children from prosperous communities to be better prepared to compete academically than children from poor communities. Thus, the structure of the American educational system permits and even promotes such unequal ueatment of schoolchildren.

From a conflict view all institutions have a basic paradox: they are absolutely necessary, yet they are a source of social problems. It has become fashionable to attack social institutions, such as the family and the government, in recent years. But we should not forget that people depend on institutions for stability and guarantees from chaos.

Social institutions affect our daily lives. Whether we are driving down the street or standing in a long shopping line, our everyday behavior is governed by social institutions. Viewed from an interactionist perspective, our social behavior is conditioned by the roles and statuses which we accept, by the groups to which we belong, and by the institutions within which we function. And the roles, statuses, groups and institutions are, in their turn, influenced by the overall social structure of the modern society.